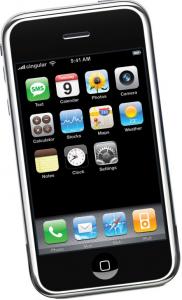 I know I’m a day late and a dollar short, but I wanted to throw in my thoughts on Apple, Inc.’s newly introduced iPhone. Besides pending trademark issue with the Cisco/Linksys iPhone, this looks like a great device. Even if they change its name – a rose by any other name would smell as sweet.

A few years back, I predicted that in several years we would see massive convergence of three devices – the mp3 player, the cell phon

e, and the camera. You could also add in video player and web/email browser. Now, I’m not talking about the cameras we see on cell phones today – even the 2 megapixel versions that are out are really not that good at taking shots. The full convergence will be successful when it does each of these tasks well.

I knew it had not taken place yet, because the mp3 player/cell phones that have come out so far are pitiful. I bought a Motorola V360 last year, which has memory card support along with a built in mp3 player. However, the interface to this mp3 player was horrible. Every time you launched the java mp3 player applet, it would take up to a minute to load all of your songs. From there it took 30 more seconds to find the song you wish to play. This is not an experience you want to have.

Motorola then ditched it’s mp3 applet in favor of iTunes for cell phones. I was able to install it to my V360 via a hack – it wasn’t pretty but it worked and greatly improved the mp3 playing ability of the cell phone. However the full experience was still missing something.

Enter the new phone from Apple. It plays music, video, photos… and oh yeah it can make calls too. Apple has completely redone the interface, and it is different than any phone currently on the market. The call interface actually looks pretty Skype-ish, which is a good thing. The way you navigate the phone is different as it is a gigantic touch screen. I think there will be some resistance to this type of navigation (as well as the touch keyboard) but it will grow on people and eventually will become the standard on all cell phones. Why keep the whole keyboard there if you only need it a fraction of the time?

I want this phone. I want it bad. Personally, it will be great to have this phone. However, as a business class device, there are a few features I am concerned about, because if it does not support them then it is DOA in the workplace.

The first is its e-mail client. During the demos, you can see it handles photos flawlessly. What about office attachments? Word and excel spreadsheets? Being an Apple device I would not expect these functions to be built in but I am hopeful that Apple has enough sense that it will open it’s OS for development. This is tied into my second reservation. The OS it is running is based off of OS X:

All the power and sophistication of the worldâ€™s most advanced operating system â€” OS X â€” is now available on a small, handheld device that gives you access to true desktop-class applications and software, including rich HTML email, full-featured web browsing, and applications such as widgets, Safari, calendar, text messaging, Notes, and Address Book. iPhone is fully multi-tasking, so you can read a web page while downloading your email in the background. This software completely redefines what you can do with a mobile phone. [Source]

OS X is based off of BSD – will this be the case with this phone? If so, it should help developers add any kind of applet they can dream up of and will greatly enhance the usability of the phone. I hope Apple takes this direction.

My third reservation is the technology the phone is using. It is not a 3G phone, so the data rates seen on it will not be as good as the Cingular 8525, which uses the 3G UMTS/HSDPA network that Cingular is rolling out. However, the technologies used in this phone might just be enough to outweigh this drawback. It is also possible Apple decided not to use this new technology for cost reasons as the device is already at the upper end of what people will be willing to pay for a phone (especially on a 2 year contract).

Apple has a real winner with the iPhone. Expect this type of phone to really flourish in the next year or two. Apple has conquered my first two devices – mp3 player and cell phone. Once they get a quality 5 or 6 megapixel camera integrated, along with their famous Apple polished interface – Apple will finally have won the integrated device battle.