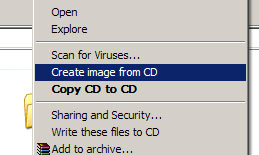 I was looking for some software to save (rip) an ISO file from a CD drive that you have. This is great for making backups, or if you access a CD often, it can help you in that you will not have to insert the CD every time your program runs. Also it speeds up your “CD” access.

I had found this a while ago but I had a hard time finding it again, so I thought I would add an entry for future reference.

It adds an entry to your explorer menu in Windows XP – explorer integration is nice! Just right click and it presents you with the choice to “Create image from CD”. From there, just tell it where to save the ISO, and it does its thing, and a few minutes later you have your fresh ISO sitting on your HD.

Teaming this up with Microsoft’s free Virtual CD-ROM Control Panel and you can then mount this ISO image as a static hard drive. Point any software requiring you to insert a CD before running to that drive letter, and it will run as the CD is inserted.

A pay commercial version software which does the same thing, a little easier than the above, is called Alcohol 120%. I haven’t used it personally but I hear it works great as well.