Firesheep by Eric Butler has just been released to the world. This Firefox plugin does a few things that have already been fairly easy to do for a while, but rolled up in one easy to use package: 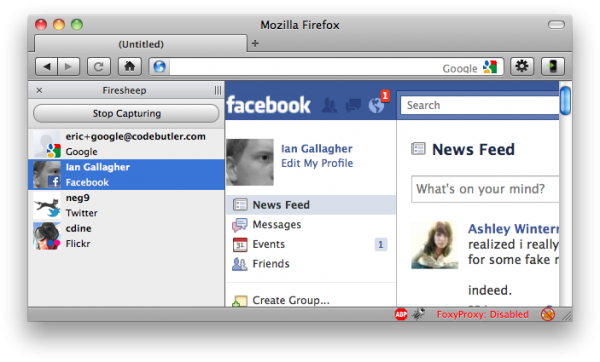 Yikes! It goes without saying that this is a major security problem for anyone who uses unencrypted wireless networks. Includes on this list are many universities and companies such as Starbucks.

It is a bit funny, because just last night I was talking with my friend Jorge Sierra about this very problem. My university in fact is one of those which uses unencrypted wifi. I installed the unencrypted password extension for Chrome to let me know when I am submitted an unencrypted password to a site. I was surprised how often this little box was popping up!

I am not sure – my undergrad university requires that any traffic going over wifi goes through their VPN which encrypts the traffic and prevents this program from working. Is open wifi still the ‘poison of choice’ for network admins because setting up a VPN-style system is too much for some organizations? Maybe – but it is clearly the wrong answer.

The other clear reason is that it is easier to use, and this is a valid complaint from a user experience perspective. I’ve seen plenty of folks have a hard time even with a simple WPA password. A shared password makes it even harder for a user to sign in. Hotels and coffee houses across the world opt for open wifi because it is simply the easiest for consumers to use. This is a problem us tech people need to solve.

Even if it is encrypted via WEP or WPA (1) these are very insecure protocols and still can be hacked with relative ease. This plugin could in fact be modified to include the cracking as well and cover an even wider range of wireless networks. This brings me to my second point.

If you run ANY consumer facing app you should be passing any and all login information via an SSL secured website.

For hosts on a static IP address you simply need to purchase an SSL certificate. They are seriously under $20 these days (my cost as a reseller is $12) and are simple to install. Your code should be set up to always use this site and to never allow username and password to be sent unencrypted over the network. This is important not only at the end user’s connection (possibly over open wifi) but also for end-to-end encryption of this data.

Let’s say you are running a site on a shared IP address. You usually still have options. Most hosts I know of offer on SSL connection via the shared site – eg: https://server.name/~username/. This URL can be used to access your site’s information via an SSL certificate and it is normally included with the service.

Ideally every site would have an SSL certificate. But we need a few things for that to happen. People who buy web hosting are almost always looking for the cheapest deal. They will not be getting SSL at these bottom level prices. Hosting needs to have a paradigm shift so that people who run websites need to know that it is better to have people who know what they are doing from a security standpoint have configured and are running their servers, and that paying $10 a year for hosting isn’t sustainable. Some say that there is a significant overhead to running SSL on websites. It will, in fact, add some processing and bandwidth overhead. However this is necessary to provide security of services to the end users.

Another roadblock is the end of the free source of IPv4 address blocks. Web hosts need to move to IPv6 to free up IP addresses, and every website should be on its own IP address. That will allow SSL certificate installations much easier.

What can you do, right now, about this problem? If you have to use an unencrypted wireless network, you should be running some sort of VPN to encrypt your traffic over the air as this is the most likely place it would be sniffed. You can get a cheap VPS at < $10 a month and proxy all of your traffic over SSH. Not the fastest method, but it will secure your data.

You can also install the Chrome Extension to warn you if you are about to submit form information via an unencrypted website. It isn’t the prettiest extension but it does get the job done.

Hopefully network, web and system administrators will get their acts together and push for a solution to this problem. It is a big one and one that isn’t apparent to the end user until their data, financial details and/or identity is stolen. We can fix this.