HBO GO has been in the works for a while now, and is an indication of what some networks are trying to do to add value to their subscription rate. Offering video for streaming online is definitely a benefit to a premium channel like HBO. And it is a glimpse as to what the future of online video will hold. 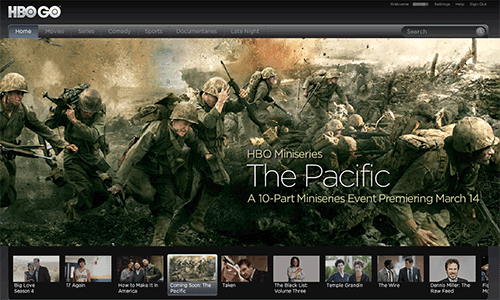 I recently got rid of my cable box and implemented a do-it-yourself solution. Since HBO is a premium channel and encrypted, they force you to either buy a cable box via subscription or also a cable-card (which they also charge for). This actually gives me a unique perspective on the service: would I pay for HBO to receive the HBO GO online only offering?

Starting with the online interface, I was actually very impressed with it. It is done entirely in flash and is simple to use. To receive access to HBO GO at this point, you must be a Verizon FiOS TV subscriber and also be signed up to receive HBO. HBO will eventually be offering this to other cable providers in the future as part of the TV Anywhere initiative. Once you log in you are presented with an image-rich user interface. You filter by TV show, movies and categories and everything was very intuitive. Information is available on shows and movies, including any extra available content. There is a ‘watchlist’ where you can add your content into a queue which will play through automatically. 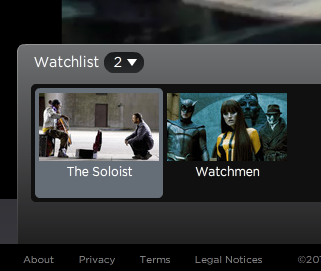 By default, video will play in “SD” or Standard Definition. The quality is what you would expect, some graininess and compression is visible. However, there is a small switch named “Watch in HD”. The video looks simply spectacular in HD. If I had to guess I would say that it is in 720p resolution, which isn’t too bad for streaming video which has a very small buffer time.

The main drawback I saw was that the selection isn’t great, but it does give you a sample of the premium content available on HBO. It does offer HBO-only shows such as True Blood, The Sopranos, The Wire and a few more. Each category holds a dozen or so shows, and not the entire HBO library. However next to Netflix the movie selection is extremely sparse. As the service stands, I would not see it being valuable as a movie-streaming service. HBO really needs to up the ante and offer the majority of their content on their website if subscribers are paying for it. Curb Your Enthusiasm is a notable missing series.

Another technical detail I wish to touch on is how they chose to use Adobe Flash for the technology for streaming video. I have a somewhat older CPU and Machine (Athlon X2 4200 CPU) and on Adobe 10.0 I did see some significant frame dropping, especially in HD mode. Having learned about Flash 10.1 beta coming out of Adobe Labs, and knowing that it is optimized to use your GPU to play flash video, I tried upgrading and it significantly improved the video performance. Windowed performance was a little shaky but Full-Screen framerate was great. If you are running an older system, consider upgrading to the latest Flash versions for the best video performance.

There has been some talk about HBO possibly offering the HBO GO site to non-cable subscribers for a monthly fee. If they are going to be successful at offering an online-only offering, they will need to offer ALL, or at least a majority, of their shows and a larger movie library which equals their cable offerings. Without that, they are offering a restricted service which is basically just placating the growing demand for on-demand video from content providers and not setting the proper tone as a premium content provider.

The images below are screenshots from the service, to give you an idea as to how beautiful the interface is:

In summary, the HBO GO online on-demand video streaming service from HBO is a delight to use and the quality and performance is spectacular. However, the lack of content is obvious and if they wish to really attract subscribers they are going to have to offer much more. Otherwise it is just one of those extra services that might gain a few followers but isn’t going to drive users to the service in droves. I applaud HBO for dipping their toes into the online video streaming world – now they need to embrace it and lead us into the future of premium video content online.